The state of Oregon in the Pacific Northwest is a blessing in the form of a natures basket. Hence, is one of the best natural playgrounds in the world. Moreover, many of its sights contend to become a part of the natural wonders of the world. A trip to this place wouldn’t put you in a fix of choice. You can visit the beaches, mountains, waterfalls as well as the dessert altogether. Go on some of the most thrilling hiking experiences to witness natures major self-developments.

The greatest part about Oregon is that its coastland extends up to 363 miles and it is home to over 50 mountain and rocky regions. Additionally, each season in Oregon offers the tourists different adventures. Many of its festivals take place in the colourful months of October lasting through March.

As visitors or travellers, it becomes essential to know the best seasons to go to your destinations. This helps you enjoy the experience better and remain safe. Oregon is well known for its devastating winters. If you look at visiting this state in the winter (October and May), you wouldn’t be able to enjoy a hike along its waterfalls. The slopes turn slippery and seeking permission would become a tedious job.

The summer is the best time to visit the states mesmerizing waterfalls and during the fall, push yourself to a special hiking experience. Furthermore, winter covers the mountains with snow and your adventures would mostly be snow focused.

Nevertheless, the hotel rates drop. If you visit with the hopes of spending a comfortable vacation, this season is the best for you. However, the season of summer remains the peak one, thus filling the hotels. At this time you can encounter many unique animals and go on one of those exciting hiking thrills.

As this state receives a swam of visitors all around the year it becomes essential to cater to the varying needs. Thus, many hotels developed over time in this region. Some of the comforting and affordable stays are listed below: 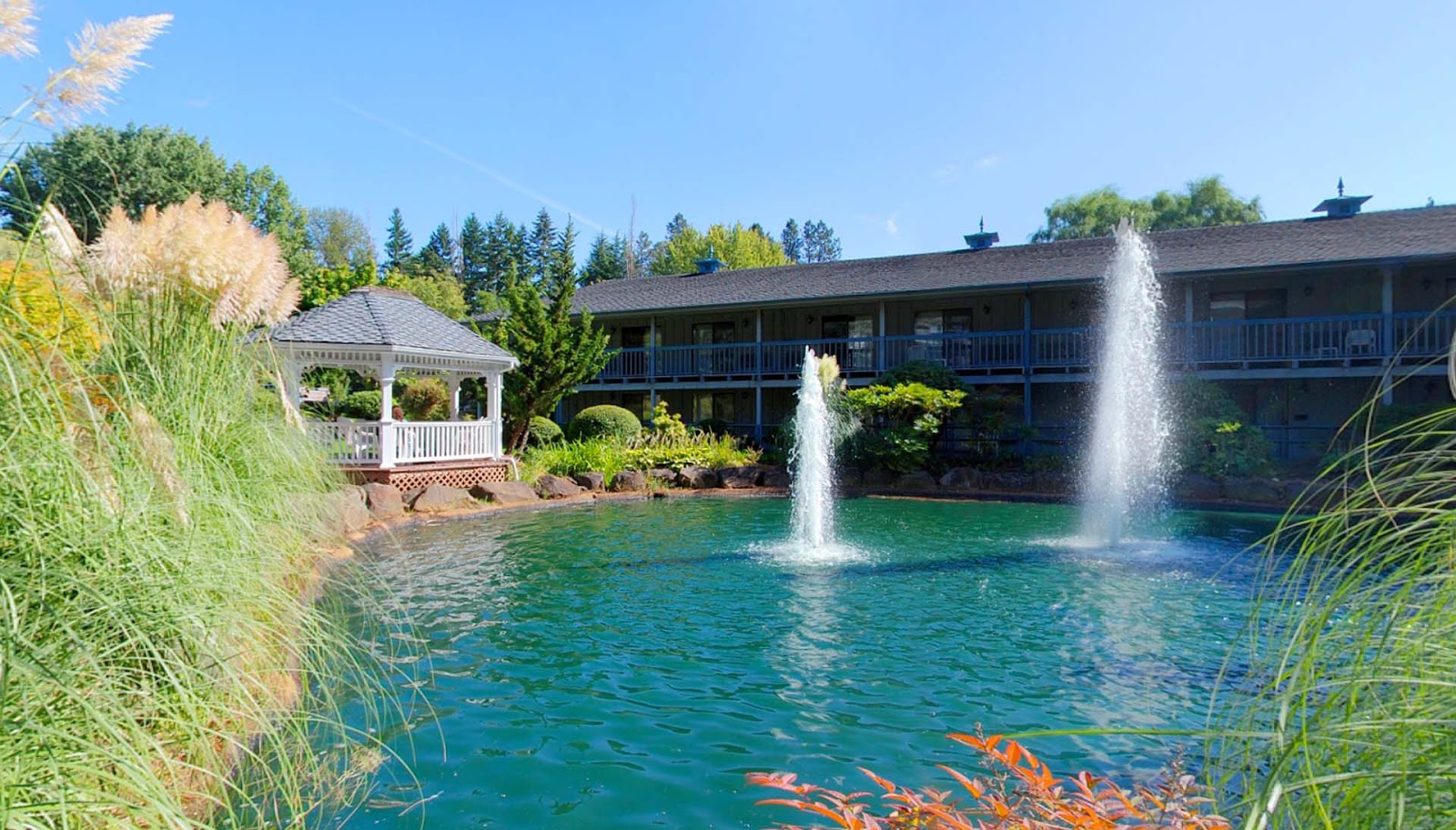 The Shilo Inn spreads its essence in the resort city of Seaside, Oregon. A few days spent in this resort would help the tourists experience the varied cultures at the Seaside. It offers the Shilo visitors a glorious view of the Pacific Ocean and spectacular sunsets. All of this provided at just $68 per night.

This resort seeks its occupancy in Bend, Oregon. Set in the foothills of the Cascade Mountains, Sunriver is best for family vacations. It offers a world-class spa, a vast golf course as well as adventure sports trails such as biking, kayaking, and hiking. It sticks to the motto one venue four distinctive courses. Additionally, a night spent at this resort would cost you around 250$. Sunriver remains on the pricier side but offers some priceless thrills.

Commodore is perfect for a one night halt during a long drive or a road trip in the coastal areas of Astoria, Oregon. It stands as a boutique hotel in the historic downtown in the intriguing city. The commodore occupants are provided with inviting refuge, whether they choose to stay in a suit or a cabin. The hotel features crisp modern decor rooms, elegant interiors with many free essentials. What’s more? The hotel also accommodates pets. You can vacation in Oregon with your loving furry-buds. All this offered at varying prices of 88-168$ a night depending on your choice of rooms and views.

The classy Hotel Delux features free Wifi, a health and fitness centre, as well as fantastic hospitality. You can chill with your pets or sunbath by the poolside. The rooms are spacious, beds comfortable, also pet owners can avail a bed for their pets at a nominal charge. The decor here follows a lovely movie theme. The Portland Airport is just two minutes walk away from this hotel. To spend a night at this place, the visitors must shell out $ 225.

The Doubletree by Hilton offers 193 luxurious rooms, located at the heart of Willamette Valley. The proximity to government offices makes for its best feature. Also, wine county’s and award-winning vineyards are just a few miles away. One your arrival the staff will serve you a refreshing specialty of Doubletree, a chocolate chip cookie.

Feel at home in one of their fabulous guest rooms. You can also start your morning with their wake-up breakfast consisting a range of hot and cold items for a nominal charge, remaining complimentary for the Diamond and Gol members.

After a long day of travel, you may also enjoy an escape to tax-free shopping at the Woodburn Outlet Malls. You may also choose to relax at the spa or in a temperature regulated indoor pool.

Owing to its rich cultural background and many trades initially, the state of Oregon in the US undertook many developments. Also, made commuting easier and reduce traffic that was ever increasing. The government of the state decided to develop the region by establishing bridges. These became firm foundations to connect many cities and counties. Additionally, many of the bridges redeveloped in the recent past and went on to symbolize many different cultures that to this date entice its commuters.

This is a remarkable American bridge, which is picturesque and remains the inspiration behind many artistic creations. Portraits and photographs feature the bridge along with its scenic natural background. These Oregon Bridges make for a long yet, beautiful crossing for the Pacific coast river.

This region began its development long ago and with this development came into existence the firm St Johns Bridge. Due to the increasing industrial growth, a demand grew for an easier access to the other side of the city. Thus, the hunt began to find an engineer and a designer to establish a means for the commute. This 4000-footbridge helps its passers-by cross the large Willamette river in Portland, Oregon. To this date, the bridge stands tall looking down at the city from above.

The bridge was established in the year 1912 by American Bridge company in New York and designed specially by Waddell and Harrington. They were successful in building this 211 feet stretch of metal having a length of 800 feet. Its unique quality is that it is one among the few moveable bridges.

These mighty bridges curve over the vast Willamette River in the Multnomah County of Portland, Oregon. One can feel the cooling breeze of the river by just standing on the bridge and sensing a vibration of absolute peace and calmness even with a continuous commotion around. Moreover, with the addition of the sidewalks, the commuters can now climb up the bridge as well as go down easily.

Completed in 1966 this bridge stretches between the states of Oregan and Washington. When it opened to traffic it formed a link between Mexico and Canada.  It carries its commuters over the Columbia River. Designed by William Bugee the bridge upon completion had a length of 6545 meters.

This bridge was supposed to exchange the ferry system on the river which was inefficient and always affected by bad weather. Additionally, the bridge hosts the Great Columbia crossing every October and this makes for a beautiful sight. Owing to this event Astorians hold the Silver Salmon Celebration festival that includes a night filled with entertainment and delicious barbeques. Moreover, the bridge has featured in many vehicle advertisements due to its mesmerizing backdrops.

This is one of the youngest Bridges in Oregon to receive an enhancement. The new bridge opened to the masses on February 29, 2016. This 1976 feet long bridge, exists as a steel deck Arch shaped bridge. Thus, having 3 arches supporting its deck from underneath.

Previously, was designed by Gustav Lindenthal in 1925. It remained the first fixed span bridge above the William River and lead the need for bridge construction technology. It became the primary connector between the eastside and Washington County. As it became the primary route to move from one side to another, it was a tedious task to Detour the bridge. However, in January 2013 they lifted the old steel parts of the bridge were lifted on jacks and completed the mammoth task for faster means to travel and traffic reduction.

Initially, the bridge came up in 1929. This bridge also got listed in the National Register of Historic Places. It was opened by a huge parade and was a mark of honour and dedicated to the veterans. The bridge closed down for restructuring in the year 2008 and reopened in the year 2011.

The Maple Oregon Bridge is known for its fast yet advanced features and the renovation was done in just 12 months. This bridge resides in the beautiful Door County. Ten and associates, as well as Foth infra and environment, received the contract to design it.  It is one of the most recent developments in this region and provides for a modern design as a means of commute.

This bridge stands 1057 feet in length and gives its pedestrians some striking elements such as its lighting as well as a splendid visual treat. The visitors feast their eyes by taking a quick glimpse of the fast flowing Sturgeon Bay below.